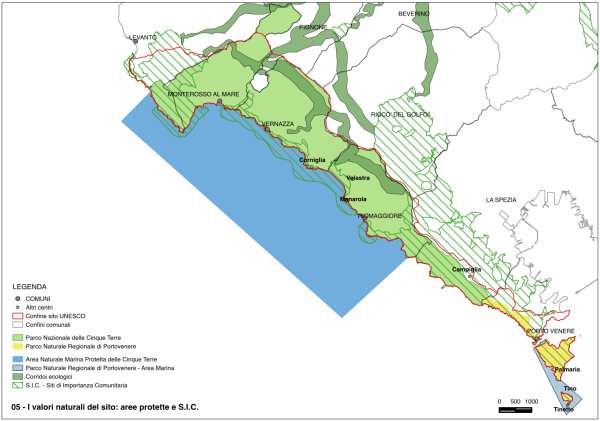 In 1997 UNESCO included the Cinque Terre in the World Heritage List as a “cultural landscape”.

The criteria adopted by UNESCO

The eastern Italian Riviera of the Cinque Terre is a cultural landscape of extraordinary value, and it represents the harmonious interaction between man and nature established to realize a place of outstanding quality. It shows a traditional millenary lifestyle, which goes on playing a leading socioeconomic role in the social life.

According to UNESCO, the three criteria according to which the site has been included in the WHL are the following:

In particular, the Cinque Terre’s landscape has been classified as belonging to the category of “organically evolved landscape”, which is “the result of an initial, social, economic, administrative and/or religious motivation, whose present shape has been developed in association with and as an answer to the natural environment. The evolution process expresses itself in the shape and in the configuration of the landscape’s elements”.

The landscape of the Cinque Terre belongs to the subcategory of the “living landscape”, which is defined as the one that “has an active role in the contemporary society, in close connection with the traditional lifestyles, where the evolution process is still active. In fact, the landscape shows not only the material patency of its shapes, but also their evolution in the course of time”.

Also the Cinque Terre’s extraordinary universal value has been acknowledged, on the  basis of their “ability to represent a distinctly defined geo-cultural region and the essential and characteristic cultural elements of such a region”.

Since the Cinque Terre’s landscape belongs to the World Heritage, it meets the criteria of integrity and authenticity that express themselves in the specificity aspects and in the typical shapes of the agricultural landscape, characterized by the rural settlement and by the terraces supported by dry-stone walls”.