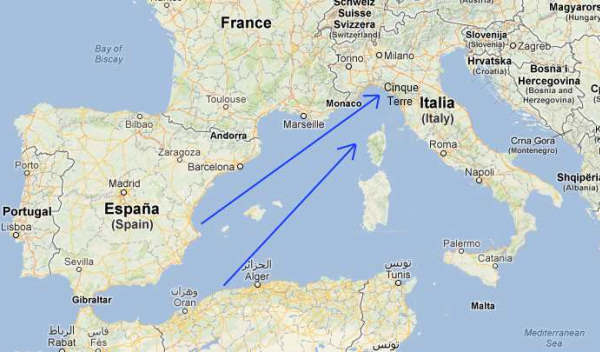 Sea-storm in Cinque Terre; the waves start from far away
The five countries can be visited at all times of the year: summer and winter. You can walk the trails, visit the countries, swim and sunbathe in the summer, sleep in excellent accommodations, enjoy a good food.
But for those who visit the Cinque Terre in the fall or winter, there is the possibility of an unexpected spectacular, unpredictable and impressive: the sea-storms.

Periodically there are sea-storms of great violence, which are a spectacular proof of the force of nature but create dangers along the coast, navigation problems, damage to port facilities, erosion on the coasts, damage to the vessels.
The big waves crashing so hard against the Cinque Terre coastline, born far away, many miles away, in another country, and when they find favorable conditions, they come with great height and great strength.

The storm is the result of many factors, but the most powerful waves that occur in the area of Cinque Terre, are those that form in Spain, passing between Corsica and France, and pushed by the wind getting bigger and crashing in Levante on the Ligurian coast, particularly between Monterosso and Riomaggiore. Manarola is the country less secure for the shape of the coastline.

In the area of the Cinque Terre the reigning wind is the sirocco, Scirocco in italian, (wind from Syria) that comes from the south-east, the prevailing wind is south-west wind, Libeccio in italian, (the wind of Libya) that comes from the southwest. The prevailing wind is what occurs for a greater number of days during the year, while the dominant one is the wind that in the year comes with more speed.

The names of the winds do not seem to correspond to the countries of origin when viewed from Cinque Terre, Manarola in particular, but the origin of the names are from the maritime tradition of the ancient navigators Greeks and Romans.

In fact, these ancient navigators saw and studied the wind imagining to be in the center of the Mediterranean, so from the northeast the Greek or Grecale (wind from Greece), north-west Provence (from the eponymous region of France), southwest Libya, where the southwest wind (wind from Libya), and south-east Syria, from where the south wind (the wind from Syria).
The power and duration of the storm are influenced by a number of factors an the main ones are:

The Cinque Terre area, and the Riviera di Levante are both protected by the mountains from north and northeast, the wind direction from northwest to southeast is the one with greater possibility of action of the sea.
Looking at the map it is clear that the reigning wind, the most frequent, from the south-east, does not have the ability to create large sea-storms thanks to the presence of the Tuscan archipelago and Corsica, as well as the winds from the south, sheltered by large islands Sardinia and Corsica.

Even the wind from Provence (from the northwest) fails to create significant waves, because the stretch of sea that has provided (Fetch) is very limited.
It is clear looking at the map of this part of the Mediterranean Sea, the prevailing wind is from Libeccio from the southwest, which manifests itself with great speed (up to 65 knots), the Fetch is a maximum of about 540 nautical miles the shape of the coastline does not hinder the seas in this direction.

When Europe meteorological situation is such that it creates a low pressure on the Mediterranean coast of Spain, and this begins to move towards the Ligurian Gulf, creating a pressure gradient with strong winds from the southwest that thanks to the great Fetch available, the Balearic Islands (Spain) to the Cinque Terre, causing high waves of the Ligurian sea.
Then, when this situation occurs, in the sea of the Cinque Terre, the atmospheric pressure, particularly low, the astronomical component of high tide (the one that depends on the moon) form very high and violent waves, which cause sea-storm with the main characteristics of the ocean.
The shape of the seabed in the Cinque Terre and also the stretch in front of the town of Manarola ,which is visible from Casa Capellini, has relatively high depth even a few tens of meters from the coast, this does not reduce wave energy and the waves powerfully crash the rocks .
The direction of the sea from the south west is orthogonal to the coast, there are no zones repaired, in particular in the area of Manarola, and therefore do not have any power reduction for the inclination with respect to the direction of the wind and the sea coast .
The season of major storms is from November to March; the show is amazing, huge splashes that bathe the rocks and the neighbors to the sea, with salt clouds that rise and arrives everywhere, even in the high parts near the church square.
These storms are beautiful to look at, there are many photos of Manarola with the storms, personally I remain hours watching this show, but you have to be very careful to do not get too close: the waves are dangerous for mens and damage the house close by the sea.
The storms also create problems to the vineyards of the Cinque Terre, especially if they occur outside the winter season because the wind carries the salt everywhere, even in the vineyards away from the sea, damaging the vines.
In the graph below the measuring buoy in front of the port of La Spezia in the storm of 15 and 17 December 2011 it has produced waves of over 10 meters.
Is interesting to note the rapidity with which the sea by a 2-meter wave height is arrived at by more than 8-9 meters waves.