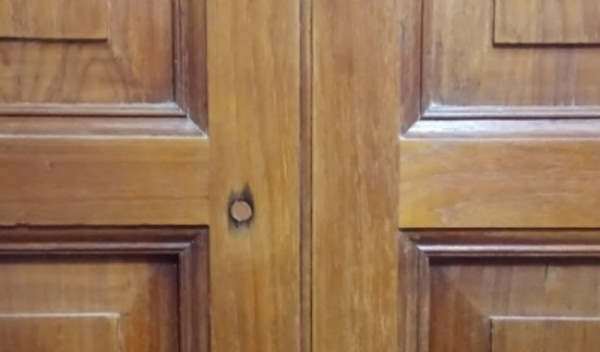 By the end of the 1800s, sailing by ships was gradually replaced by steam-powered ships, especially after the opening of the “Suez Canal”: this forced the sailing ships to circumnavigate Africa.
From the data of the Italian Naval Register (RINA) in 1865 out of a total of 1,274 vessels, only 3 were steamed, but already in 1904 out of a total of 2,512 1416 vessels were steamed. The demolition of the sailing ships, and then of the first iron vessels , also involved the construction sites of the nearby port city of La Spezia, the materials were partly destroyed, but the most valuable part (precious wood, brass, furniture, and more) were reused. The wood of the doors found in Casa Capellini, at least those that we did not have to replace, comes from the demolition of old sailing ships; they are in precious teak, with the thickness compatible with that of the covers of the ships.
You will see in some of the doors of our rooms the circular holes of the old nails fixed to the hull of the sailing ship, blackened by the oxidation of the metal, and closed with wooden plugs made by the carpenter with the wood bought from the shipyard demolition built the doors of our home.
A small story of Casa Capellini, in Manarola, in the Cinque Terre, where we try to maintain what our family has done, in one of the oldest houses in this village.