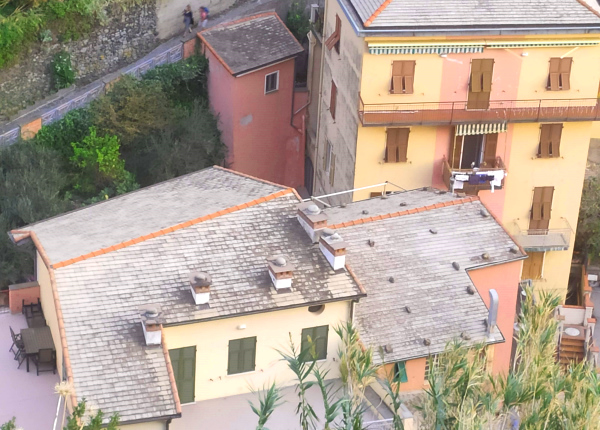 If you look at a panoramic photo from above of Manarola and the villages of the Cinque Terre, you will notice that most of the roofs of houses are gray.

They are made with a slab of “Ardesia” a stone that is taken from the quarries of the valley behind the village of Lavagna, in the mountains of Liguria, and is used throughout the region, but especially in the seaside towns and in the Cinque Terre.

It is a rock of sedimentary origin (originating from sediments on the seabed) that has compacted and has taken on the consistency current due to the pressure and temperatures to which it has been subjected over the millennia.

It lends itself to being cut into blocks and thin slabs up to about one centimeter thick, and is used for school blackboards, for floors, stairs, furniture, billiards, and roofs.

In the roofs, the stone slabs are staggered overlapping, in three layers, to ensure resistance to rain, and up to about thirty years ago they were fixed to the structure with lime mortar, placing large stones on top to prevent let the wind lift them.

The modern solution, such as the one created in the roof of Casa Capellini, which we completely renovated in 2019, involves the laying of the slate slab held by stainless steel or copper hooks to wooden strips between which it can pass the air that dries the underside of the sheets; this method also allows for small thermal shifts as well extending the duration of the coverage.

During the works, we rebuilt the roof with a structure entirely made of wood and placed insulation on this acoustic, thermal insulation, a vapor barrier and finally the slate slabs fixed to the wooden slats.

From our panoramic terrace, with a view of the sea and the village, you can easily see the slate slabs of our roof and the metal hooks that hold them they hold back, and looking towards the town and the sea, identify some roofs (there are few left) with the stones on them slate, made with the old fixing system with lime.

At this link, you can find some notes on the history, properties and use of slate.