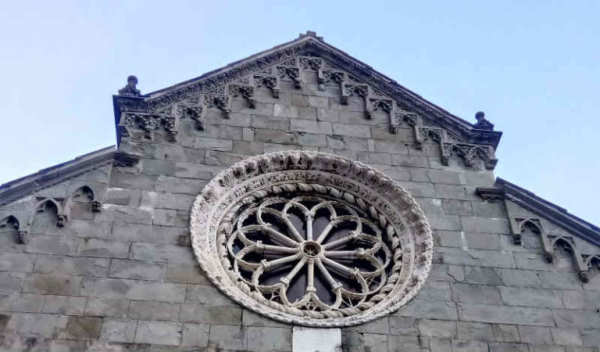 Leaving Casa Capellini, in Ettore Cozzani street, you are on the church square; a few meters from the parish church dedicated to San Lorenzo martyr.

a rare thing in Italy

You immediately notice that the church, the oratory, the bell tower and also the rectory, are not side by side, but are detached and not contiguous.
This is unusual in Italy.

the epigraph on the facade

In the tombstone on the façade, written in Latin:
“IN THE NAME OF CHRIST, AMEN, 1338 THE DAY .. MONTH OF AUGUST THIS CHURCH WAS FOUNDED WITH THE NAME OF THE BIRTH OF THE VIRGIN MARY BY THE WORK OF THE COMMINITHY AND THE MEN FROM MANAROLA AND VOLASTRA”

The original dedication of the Church of the Nativity Virgin Mary was changed to that of San Lorenzo in the second half of the seventeenth century.

The façada is in local sandstone in brick perfectly squared stones. It has a beautiful 1375 rose window with a floral frame in White Carrara marble.

The voids between the small radial columns were inserted the strar sign, nown partial declined, sculp of Marmorari Campilinesi that made many works in the area.

In the tombstone up the rose window, written in Latin:
“In the name of Christ 1375 the day month of august this work was done by Massari Giuliano di Lucchinetto and Lanzarotto di Marcherotto, the Rector of the Church was the parish priest Rolando”.

The Gothic style are also evident within the church, there are three naves with massive arched ogive shape. The barrel vault has replaced the original roof trusses with wood.

Inside the church you can admire on the wall behnid the altar a triptych tempere on wood (1479) picturing the Virgin with the Holy Child between S. Matteo and San Giovanni Battista on one side and Santa Caterina d’Alessandria and San Lorenzo on the other.
Above there emall paintings picturing God centered on God the Father in the act of blessing with the open book and with the inscription “ego sum lux mundi, via veritas” in the middle and the Angel Gabriel announcing holding a card with the inscription “AVE GRATIA PLENA DOMINUS TECUM” on the right the Virgin announced on his knees, with his hands clasped.

From studies that the work is attributed to an anonymous fourteen hundred named “Master of the Cinque Terre” and considered closely related to Tuscan culture.
The altarpiece is surmounted by a cross painted on wood by the end of the fifteenth century, restored in 1975.
In the side elements are depicted in another God the Father and the Holy Spirit represented by a dove.

On the left is a representation of the Madonna, on the right San Lorenzo, Santa Maria Maddalena in the bottom of the jar with the herbs.

On the left wall a triptych di San Lorenzo to the church from Volastra.

On the right wall, near by the the Relic chapel you can see a tabernacle for the custody of the holy oils of the sixteenth century, surmounted by a marble bas-relief depicting San Lorenzo.

We thank Don Carlo Brizzi Archpriest of Manarola for having granted to news reports.